I travelled to Phuket to spectate the Laguna Phuket Triathlon. Having not ran a competitive 5km for a long time, and there being an opportunity to do so on the Saturday, I decided to enter the event.

It was technically a charity fun run -- something the locals could participate in -- but I wanted to see if my training had paid dividends. My 5km PB still technically stood at 20:56, something I set during my first 10km over a year ago. With all the triathlon training and marathon training I was doing, I never got around to doing some proper speed work.

I was doing some laps on the track in Chiang Mai, hitting sub 4:00min/km so I knew I wanted my target to be sub-20 minutes.

I think the event organisation was great considering it was just a 5km, but I guess they were just prepared for the triathlon the next day. I went to collect my race number, timing chip and t-shirt on the morning and then went back home to relax and prepare.

Had I known how busy the start line would be, I would have queued up sooner. I figured I'd probably be one of the fastest ones but I ended up starting about 4 rows back.

As the gun went, there was a quick shuffle off the start line. Someone had already fallen over so I had to dodge around them. Within ~100m, the field had already spread out and I could settle into a position. I think at this point I was around 10th place.

The weather was hot. It was averaging around 29C with 75% humidity. I didn't carry water because it was such a short event but I wanted to try and keep cool. Thankfully they had a few aid stations along the way so I grabbed some cups and threw them over myself.

I wanted to go out there and run ~4:05min/km to start with, and then drop the pace as we went. My watch recorded the first 2kms at 4:00min/km. Ok, not too much of an issue. But then it started to climb as I progressed. I thought I had no chance of breaking 20 minutes. Roughly 3.5kms in, it was showing an average of 4:08min/km. I tried to pick up the pace.

The course was actually pretty good, albeit having to dodge in and out of the slow, Instagram-photo-taking 10km runners. It was generally flat, with a few waves up and down along the golf course.

I had passed quite a few people as they started to struggle, so I knew I was roughly 3rd or 4th. Once the 5km runners in front of me were out of sight, the mind games started to happen and I just wanted to bring it home without blowing up.

Finally, the finishing chute was in sight. It was really nice running down it on my own and having the commentator shout out my name. I didn't manage to look at my watch, so I didn't have a clue what time I was going to achieve. I crossed the line and stopped my watch... 19:49!! Wow, I actually did it. I was pretty confused at this point, and then I realised what had happened. There was some tree cover along the way and the GPS was wobbly as we went. So all my paces along the way were slightly off, ha.

My average heart rate was 179, with a max of 190. Owch. It looks pretty steady throughout. I know more speedwork would bring down this figure.

The athlete area was really good. They had a ton of water, chilled towels and a large selection of food.

So now the question was what place did I come. I knew they were giving away trophies to 1st, 2nd and 3rd place. I didn't bring my phone so I couldn't see what place I was. I ended up waiting inside the celebration tent and asked someone to look at the leaderboards... I came 4th! Ah, oh well. Carrying a glass trophy would have just added to my carry-on weight.

So now I can see the online tracker and find out some split paces, I can see I actually ran the first 2km in 4:10min/km and the final 3km at 3:50min/km to average 3:57min/km.

So yes, pretty proud of this achievement. I hadn't focussed on much speed work but I still managed to do it, especially in challenging temperatures. 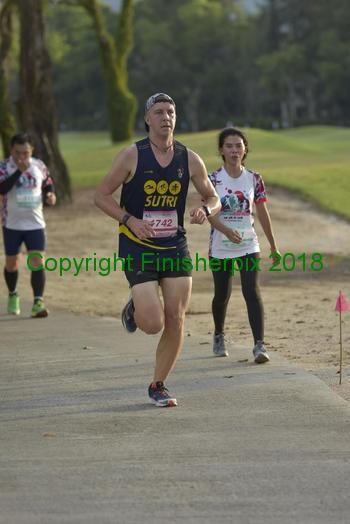 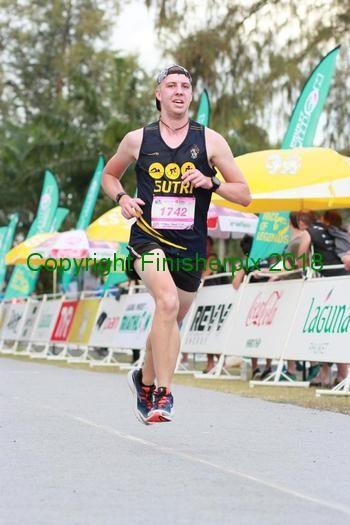